TURTLES : Turtles are reptiles. They are characterized by their cartilaginous shell that develops from the ribs and acts as a shield for the animal. They are commonly cold-blooded animals – which means that their internal temperature fluctuates according to the temperature of the environment.
Although many turtles spend large amounts of their lives underwater, all turtles and tortoises breathe air and must surface at regular intervals to refill their lungs. They can also spend much of their lives on dry land. 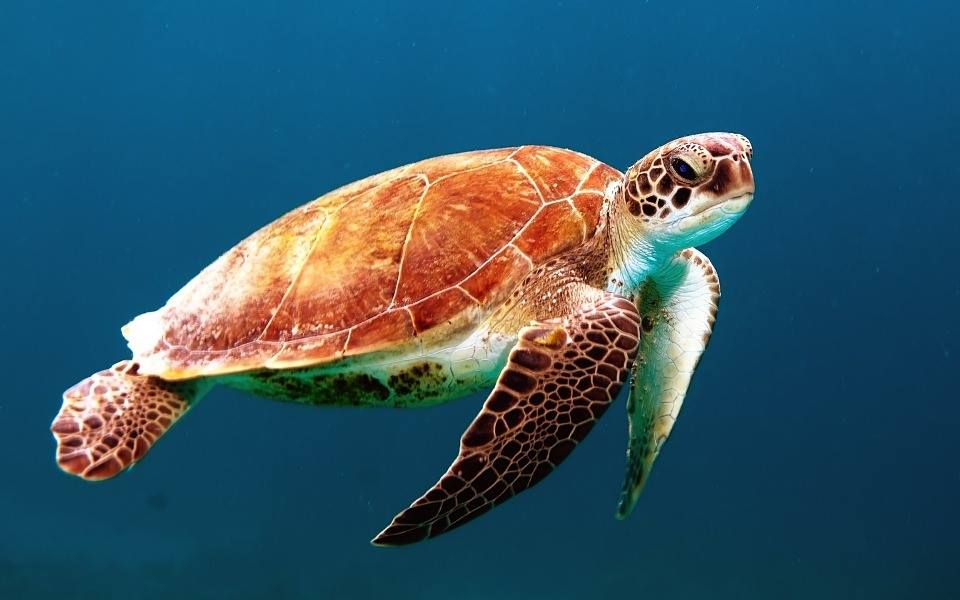 The earliest known members of this group date from 220 million years ago, making turtles one of the oldest reptile groups and a more ancient group than snakes or crocodilians. Of the 356 known species alive today, some are highly endangered.

Turtles spend most of their lives in water. They are adapted for aquatic life, with webbed feet or flippers and a streamlined body. Sea turtles rarely leave the ocean, except to lay eggs in the sand. Freshwater turtles live in ponds and lakes, and they climb out of the water onto logs or rocks to bask in the warm sun. Tortoises are land animals. Their feet are round and stumpy, adapted for walking on land. They also dig burrows with their strong forelimbs. Terrapins live on land and in water, usually in swamps, ponds, lakes and rivers.

What turtles eat depends largely upon the environment in which they live. Many adult land turtles will eat plants, worms, and small insects. Some freshwater turtles eat fish and other aquatic creatures. Some sea turtles will often feed on soft-bodied marine animals such as sponges and jellyfish. Still, other sea turtles may live off shellfish or algae.

Like other reptiles, turtles lay eggs that are slightly soft and leathery. The eggs of the largest species are spherical while the eggs of the rest are elongated. Their albumen is white and contains a different protein from bird eggs, such that it will not coagulate when cooked. Large numbers of eggs are deposited in holes dug into mud or sand. They are then covered and left to incubate by themselves. Depending on the species, the eggs will typically take 70–120 days to hatch.
When the turtles hatch, they squirm their way to the surface and head toward the water. There are no known species in which the mother cares for her young. Sea turtles lay their eggs on dry, sandy beaches. Immature sea turtles are not cared for by the adults. Turtles can take many years to reach breeding age, and in many cases, breed every few years rather than annually.

Threats to sea turtles include coastal development (which leads to loss of nesting habitat or making previous nesting areas unsuitable), harvesting turtles for eggs or meat, bycatch in fishing gear, entanglement in or ingestion of marine debris, boat traffic, and climate change.

How can You help?
Supporting turtle and terrapin conservation organizations and projects through volunteering or donating funds.
Supporting measures to protect nesting habitats.
Choosing seafood that is caught without impacting turtles (e.g., in areas where turtle excluder devices are used, or where bycatch is minimal).
Not purchasing any turtle or terrapin products or ornaments made from these animals, including meat, eggs, oil or tortoiseshells.
Do not take selfies with wild turtles and terrapins by holding and picking them up.
Do not buy any turtles and terrapins to keep as a pet.
Do not buy any turtles or terrapins from street hawkers, because you feel sorry for that animals. It feuds the illegal wildlife trade.
Watching out for sea turtles if you are out on a boat in sea turtle habitat.
Reducing marine debris. This includes always disposing of your trash properly, using fewer disposable items and plastics, buying locally and purchasing items with less packaging.
Reducing your carbon footprint by using less energy.

Fun Facts About Turtles:
• Turtles are reptiles.
• Like other reptiles, turtles are cold blooded.
• Turtles have a hard shell that protects them like a shield, this upper shell is called a ‘carapace’.
• Turtles also have a lower shell called a ‘plastron’.
• Green Sea Turtles can hold their breath up to 5 hours.
• Many turtle species (not all) can hide their heads inside their shells when attacked by predators.
• The largest turtle is the leatherback sea turtle, it can weigh over 900 kg!
• Turtles lay eggs and they don’t lay them underwater
• In some species of turtle the temperature determines if the egg will develop into a male or female, lower temperatures lead to a male while higher temperatures lead to a female.
• Some turtles lay eggs in the sand and leave them to hatch on their own. The young turtles make their way to the top of the sand and scramble to the water while trying to avoid predators.
• Sea turtles have special glands which help remove salt from the water they drink.
• Sea turtles live very long and can reach approximately 70-80 years.
• Many turtle species are endangered.
• A group of turtles is known as a bale.

THE COST OF SAVING
Unexpected vet bills are the last thing anyone wants, especially within a week before pay day. That

The effects of Thunder on animals and what to do about it
“I was in my room, relaxing and reading my favourite book.  Suddenly a bomb exploded in the house, o

Kruger National Park Regional Ranger and State Vet Technician arrested for poaching
How is this for a shocker! We had to arrest two of our own who have fallen into the trap of greed an

Itchy dog? Stop the allergy cycle this summer
If you are driven mad by your dog’s constant scratching, licking, itching and ear flapping this summ

Responsible Consumerism when buying Pet Food
NATURAL AND HOLISTIC PET CARE What does it mean to be a responsible consumer, whether you are purch