Lilly the Greyhound cross was a very very lucky dog, saved by an angel from the school where she was buried - alive.  The hero cleaner, Mrs Bukelwa Mbulawa called Mdzananda Animal Clinic in a panic after witnessing two janitors burrying a dog alive on the school grounds.  Lazola Stoyingwa rushed to Luhlaza Secondary School in Khayalitsha and started digging into soft ground.  The dog was unearthed from a metre-deep pit near the tennis courts and was underground for at least 30 minutes and barely alive when they reached her. 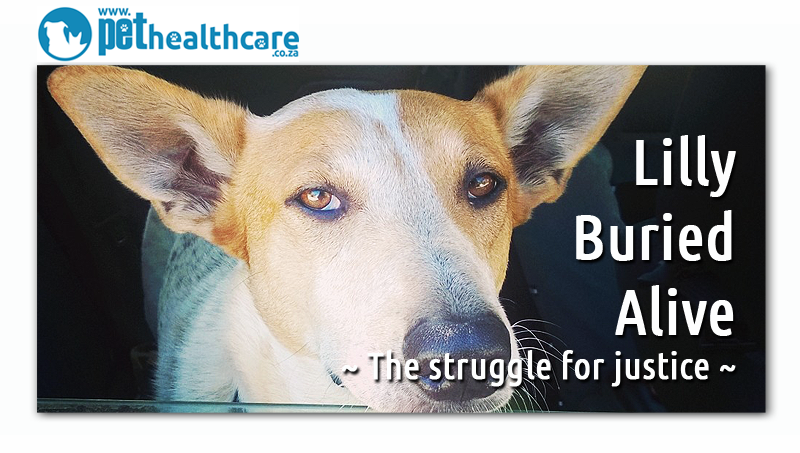 This is how the story unfolded: 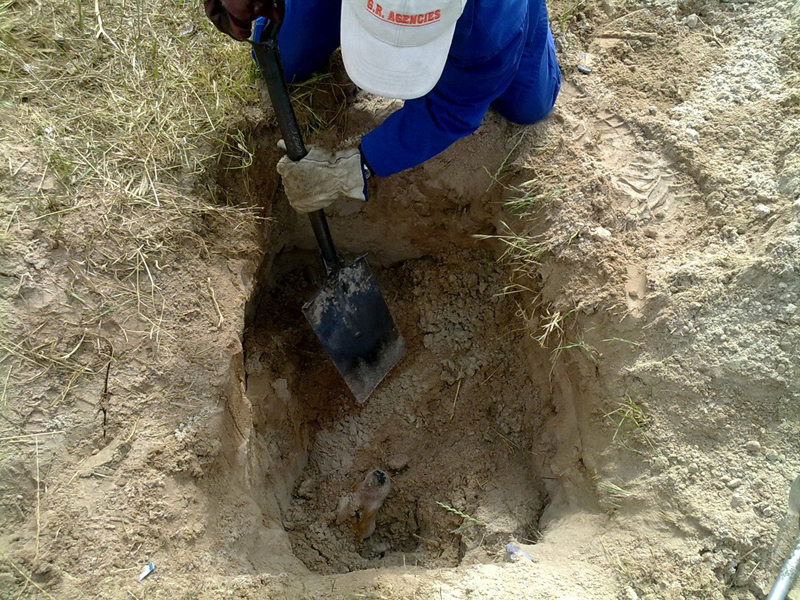 20 October 2011, Lilly was unearthed from a 1.5m hole after being buried alive.  With the dedication of the Mdzananda staff, ‘Lilly the Warrior Dog’ was able to make a full recovery and was adopted into her own ‘forever home’ by Helen Walne, the journalist who covered her story.  Sadly the cleaner, Bukelwa Mbulawa, was fired a week after she alerted IWAF of the incident.

After many months of court proceedings and postponements the final judgement took place on Monday 24 June 2012. The principal, Manono Makhaphela, was found guilty of animal abuse and neglect.  He was charged with a R6,000 fine but only had to pay R3,000. The other half was suspended for a period of five years under the condition than an animal protection awareness programme was implemented at the school no later than 18 July 2013.

Lilly meets the man that buried her alive.  After it emerged that two of the school’s janitors, Poto Mfengu and Mkhumbuzi Ncedana, were responsible, they were charged with animal abuse and ordered to work at the Mdzananda Animal Clinic for 150 hours of community service.  At first they were ordered to work in the vegetable garden of the clinic, but soon it became aparant that they enjoyed working with the animals too.   Mfengu claimed later in court that the school’s principal, Manono Makhaphela, had ordered them to bury the dog because it had made a mess of one of the classrooms. “I was desperate to keep my job,” said Mfengu.

It was there that Lily and Mfengu met for the first time since the incident.  The pup’s legs have completely recovered since she was adopted by journalist Helen Walne.   “She’s even climbing trees,” said Walne.

Mfengu, who remembers Lily as a malnourished and disabled dog that used to drag itself around the Khayelitsha high school’s grounds, said it was amazing to see her looking so healthy. “I’m so sorry for what I did. After it happened I had sleepless nights.”   The janitor, who lost his job at the school, has decided to stay on as a volunteer at the clinic. He said he had finally found his calling.

Meanwhile, the school’s principal was still facing two charges of neglect, torture and cruelty for burying the dog and another one for causing an animal unnecessary harm under the Animal Protection Act.

Manono Makhaphela only paid R1000 of the R3000 that he was fined and no Animal Protection Awareness programme was implemented at his school.

The Mdzananda Animal Clinic reported the case back to the National Prosecuting Authority who was supposed to instruct the prosecutor to issue a warrant for Makhaphela’s arrest and bring an application before court so that the suspended sentence be put into effect. This too was not done.

The Mdzananda Animal Clinic started a petition of signatures to hand to the judge and the High Court to enforce a harsher punishment and to ensure that the principal serves his initial punishment fully.  The support from the people and their hard work paid off and gave them a good standing to get their voice heard.

Mr Manono Makhaphela, the school principal of Luhlaza Secondary School Khayelitsha, who was found guilty of ordering janitors to bury a dog alive on the school grounds appeared in the Khayelitsha Magistrate's Court in the last week of March 2015 for not complying with his punishment.

In 2014 the Mdzananda Animal Clinic reported the case back to National Prosecuting Authority being frustrated that no punishment had been served. "We were low on hope that anything would change. It was with great joy that we received a phone call early in 2015 with the news that the principal had been found, placed in jail for a day and is expected to appear in court later that month."

Jane Levinson, the Mdzananda Animal Clinic project manager, was asked to appear in court on the 31st of March to testify against Makhaphela. “It was a long, tiring day, but that it ended with hope,” said Jane Levinson. The principal has been made aware that he has a criminal record and that he has until the 18th of July 2015 to start a humane education program if he wants the record to be removed. He seems to at last understand what it will be like to live with a criminal record and is showing some form of co-operation as he wants the criminal record removed. 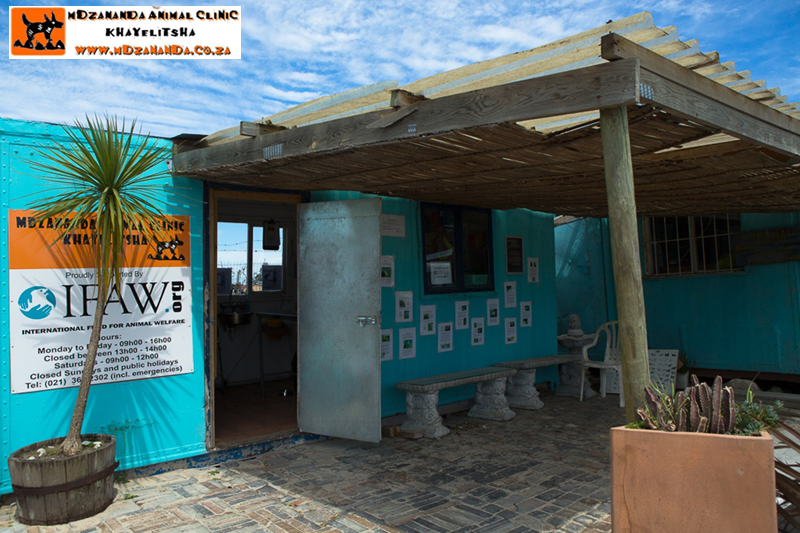 “We are thankful for the prosecuting authority for taking this action and we can only hope that Mr Makhaphela will be ready on the 18th of July. He will need to send a progress report to the Mdzananda Animal Clinic every six months for five years based on the progress of his education program.  We are hoping that this will be the start of justice for Lily, but we are very aware that we have to keep a close eye on Mr Makhaphela. ­We will keep fighting for justice for Lily, no matter how many years it takes. This is not just about one dog but about setting a precedent for future animal cruelty cases.” Marcelle du Plessis, Fundraising and Communications Manager Mdzananda Animal Clinic.

The Cape Chameleon
The Cape Argus

Why NO Bones for Dogs?
The best thing to do for a dog is to never give them a bone. Why do people give dogs bones?  Where

How can I help my dog cope with separation anxiety
How does your dog feel when you leave it alone? Do you ever wonder how dogs feel when we leave them

Mandela Day for the Animals
Pet Health Care always supports the notion for encouraging the public to "give and support local".

Benefits of Crate Training a Dog
Crating your dog has often been a contentious issue for many, but we believe it is more because of p

Lilly the Dog Buried Alive is Saved and Justice is Served
Lilly the Greyhound cross was a very very lucky dog, saved by an angel from the school where she was

2020 PET TRENDS
The pet care industry continues to grow at a rapid rate fuelled by a rise in pet parenting across...