Why is it illegal to own a Cape Dwarf Chameleon?  you ask.

These little critters are losing their habitat at a very fast rate, and keeping them enclosed is severely affecting their ability to multiply in numbers.  They move incredibly slow, their colours are vivid and attractive for almost everyone to say "I want one too!".  Keeping them confined is not only disastrous for their existence but also an extremely cruel and selfish act for self-love.  In order to help them, it is important for us to share with you their value by telling you a little more about them today. 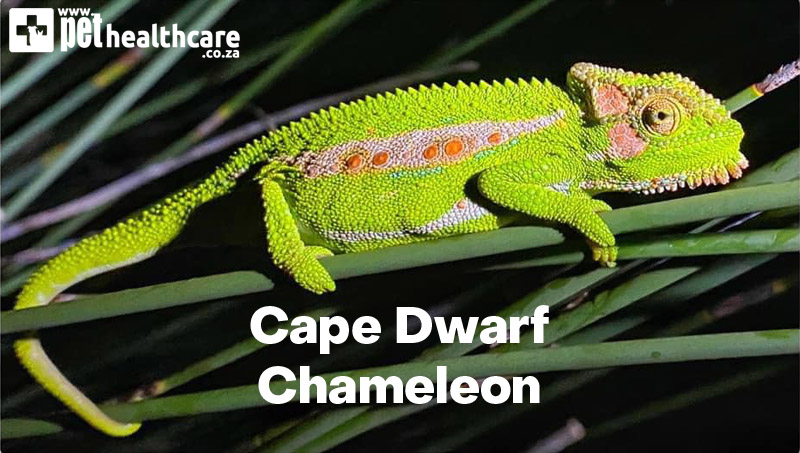 Everything You Need to Know About the Cape Dwarf Chameleon

Is the Cape Dwarf Chameleon Endangered?

Due to land transformation and habitat loss, the habits of these interesting lizard-type creatures have become threatened and substantially fragmented. Climate changes in addition to this habitat loss could have an immense impact on the preservation of the Cape Dwarf Chameleon. In this post, we will be sharing everything there is to know about the Cape Dwarf Chameleon.

South Africa encompasses unique biodiversity and is habitat to more than 350 reptile species, with 19 chameleon species formally named and eighty percent of these species are prevalent in this country. The dwarf chameleon (Bradypodion pumilum) lives in bushes, trees, and various vegetation types found in gardens. They are not territorial, but they tend to stay close to a particular area for the survival of their species.  Should they be removed from their habitat, they will suffer and slow painful death due to their confinement or change in habitat.

This chameleon species is restricted to the South Western Cape area to De Hoop in South Africa and their numbers are according to the International Union for Conservation, their numbers are near threatened.  They are not yet endangered, but they face significant threats due to the loss of their grassland habitat because of grazing cattle. Provincial nature reserves and national parks protect around forty percent of their habitat.

Factors that contribute to their loss of habitat are agriculture, urbanisation, and frequent bush fires that lessen the population numbers. Climate fluctuations throughout the years also negatively impact the habitat, distribution, and lifespan of the Cape Dwarf Chameleons. Because they reside in fragmented areas, a loss of gene flow occurs among subpopulations which could result in a low recovery rate if anything goes sideways.

How to Identify Cape Dwarf Chameleons

Other Interesting Things to Know About the Cape Dwarf Chameleon

These remarkable creatures are viviparous, which means they keep their eggs inside their maternal reproductive tract until the babies are fully developed. The females give birth to about five to fifteen offspring and breeding can happen all year round. The newborns are self-sufficient.

Chameleons are solitary creatures and do not engage with other chameleons in the same area, nor do they show aggression. If they observe another, they will merely go the other way. But, on rare occasions, the encounter will escalate to fighting where they will bite one another until one goes away.

The Cape dwarf chameleon is heavily preyed on by snakes, domestic cats, spiders, and birds.

Why People Love To Keep Them as Pets

This specific species attracts individuals because of its colouration. People often catch them to keep them as pets and remove them from their natural habitat despite it being illegal. Once they are removed from their natural environment, it is not easy making them feel at home or finding food for them since they prey on specific insect species that are only found in their vicinity.

Chameleons are also cold-blooded which means their body temperatures fluctuate with the temperature of their habitat. They are incredibly sensitive to stress, and they prefer to be left alone. They need full-spectrum lighting and plenty of vegetation to survive and remain healthy. 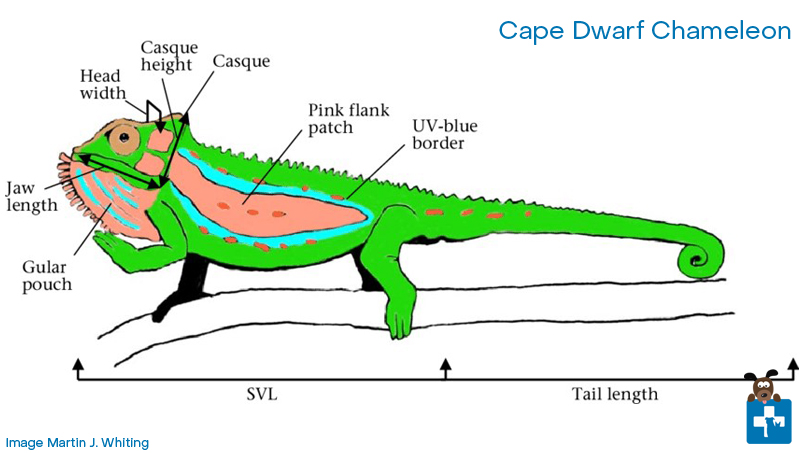 I hope you have enjoyed reading everything there is to know about the Cape Dwarf Chameleon. These little creatures are astounding, and South Africa would be a poorer place if they would go extinct. A chameleon’s main role is regulating insect and pest populations and maintaining their ecosystems as a primary predator.

It is never advisable to take a wild creature from its natural environment to keep it as a pet. Instead, rather leave them in their habitat where they thrive and work on a solution together to preserve the Cape dwarf chameleon for future generations to appreciate and admire.

Keeping up with your pet’s health this summer
by Dr Clinton Austin, Head of Clinical Development and Regulatory Affairs for Animal Health at Bayer

Pet Walk 26 Oct - Eden On The Bay Cape Town
This October they're doing something special for you and your pet Feel the sun on your back. Taste

Good and bad foods for pets
Those eyes that stare at you while you eat are just too cute to want to ignore, but it is at this t

​BOSS DOG FOOD RELAUNCHES WITH CHOW FOR CHAMPION DOGS
PRESS RELEASE  5 November 2015 BOSS’S BARK AS GOOD AS ITS BITE NEW BOSS DOG FOOD, INSIDE AND OUT In